Trawlers Passed……..1  Not many people can say that!!

I left Red Rock last week and headed to Angourie up near Yamba.  It was beautiful weather, cruising along the coast road in the rocket with our cult following growing – police, ambulance, semi trailers buses and cars big and small plus motorbikes, all following along behind.  You name it, when the rocket is on the road (especially a single lane highway) everyone wants to follow the rocket and I. Angourie is Aboriginal for noisey waters, and when your at the beach at Angourie that makes sense, amazing sets of waves rolling in on amazing beaches all day, all night.

Contemplating the next board meeting

Angourie is famous for its surf and is rated as one of the top 5 surf breaks in the world when it is going off.

I called into Spooky Beach on a friends recommendation and boy am I glad I did, what a great spot.

There were about 5 or 6 people at the beach, the waves were so good, the water so clear.  I met a couple of guys and girls  from Byron and the Gold Coast in the water who kindly leant me their boards so I could have a board meeting and catch a few waves myself.  Everyone is so relaxed. 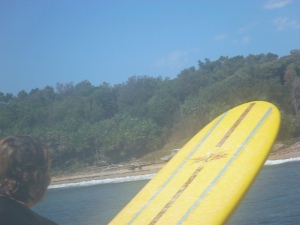 “Members of the Board”

As I was driving through Angourie I spotted a house with a little sign outside for room to rent. 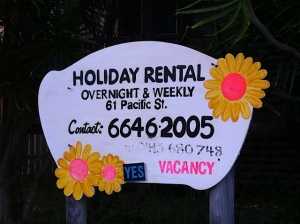 I called the number and met Thornton Fallander a former world champion surfer who owned the house and who rented me a room for the night.  After Thornton showed me around, he said “I’m going out for the night”, so I had the house to myself.  I had a great night at Thornton’s everyone is so kind, obliging and relaxed, what a great way to be! I rose early, had my green smoothie as the sun was coming up.

“Get a green smoothie into you!”

I walked over Angourie, watched the surf for a while, had an amazing swim with all these colourful fish everywhere, it was like being in a tropical fish tank.

I left Angourie and headed to Yamba, only a few kms up the road and set up camp at the Yamba Big 4 Caravan Park and stayed for the next few nights.  I was able to set the tent and awning up so that I could still drive around in the rocket during the day. 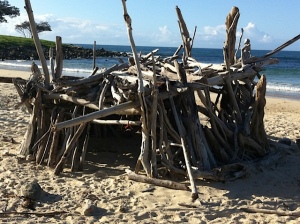 Word had got out that Mick Miller was in town in a sky blue beetle.  Yamba is a friendly neat little town with great cafes and restaurants,  a beautiful lighthouse, a few pubs and travelers from all over the place.

I checked out the fishing fleet as they were heading out for a night of fishing and raced the rocket with one of the trawlers out of the harbour.  As you’ll see from the photos below, the rocket managed to overtake a trawler. 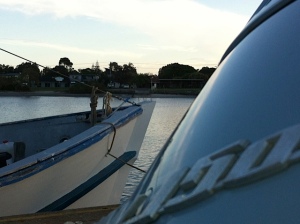 One of the motels at Yamba The Aston Motel is owned by a guy called Graham Lees and his lovely wife Mrs Lees.  Graham was originally from Sydney’s northern beaches and used to own and operate “The Beetle Wreckers” and knows the rocket well.  He in fact put the current seats in the rocket and is a good mate of Iain Murray’s who’m mum was the original owner of the rocket.  Anyway Graham still has a penchant for VW’s and he and his wife invited me to his place for a most enjoyable dinner and to check out his VW collection.

As I was driving along the track to get to Graham’s shed, Graham was coming towards me in his immaculately polished red, 1953 Porsche tractor, in true Mick Miller style, I pulled off the side of the road to let him pass, but slipped off the sidling, it looked like she was going to roll into the stagnant pond next to the track!!! As I was climbing out the passenger side window with Graham laughing and holding onto the rocket for dear life (as he too thought the old girl was going to tip), she bottomed out and we were able to pull her out with the tractor.  Watch the video for all the nail biting action.

After we all regrouped, Graham showed me some of his beetles dating back to the 50’s right through to 1978.  Cars, spare parts, an old VW German ambulance, it was rocket heaven!

The Rocket hanging out with a few old semi retired mates at Yamba.

The next day I went down to catch the ferry across to Illuka and low and behold I recognized one of the ferries I used to drive in a past life at Palm Beach, The Mirgini.  It was funny to see her again and in such great condition.  I jumped on and did the round trip, had a good look around Illuka a quaint little town, there is a great pub on the river there filled with a whole bunch of photos and stories of the good old fishing days of the 70’s and 80’s.  I had a great day with Mike Liabi from Clarence River Ferries and the skipper Scotty.  We were swapping stories of our adventures with the Mirgini.  She is now on the daily service from Yamba to Illuka, charters, functions and even a Sunday Jazz Cruise. 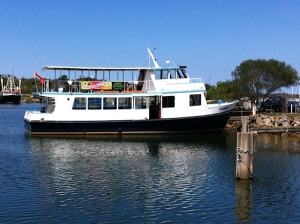 I left Yamba headed up the Old Pacific Highway, through Evans Head and Lennox Head on my way to Byron for a wedding.

I’m excited to be able to share my story with some of the people I am meeting along the way and to try and raise some money to give to support to cancer patients ad for cancer prevention and control.  Check out my donations and pledge page HERE or go to the Pledges and Donations Tab along the top of the blog.  Why not make a donation, that would be great.  Thanks.

Until next time………Stop and smell the roses!   Mick 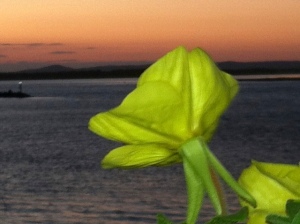 2 thoughts on “Back on the Road…….Red Rock to Yamba”