Charlie Chaplin once said “You will never find a rainbow if you are looking down!”  Well, since getting out of hospital there’s been no looking down.  Sometimes life’s greatest joy is found in its little surprises and the other day I got one of those surprises…… a pot of gold (the rocket) at the end of the rainbow!

How good to have another day on this earth.

After a week in Sydney for some appointments and check ups…….all good, I was back in Coffs. On Sunday morning I headed down to the beach and had a chat to some of the locals who looked like they were gearing up for a bit of a swim.  All ages, shapes and sizes, aptly names the Walruses,  they asked me to join them!  About a 2  1/2 km swim out around the pier and back, huge swell due to the recent storms, but what the heck.  I thought this has got a bit of Mick Miller about it,  I’m a bit of a walrus at times,  “Have speeds will swim!”.  Have credit card…..hang on, what will I do with that?  I know, tie it inside my speedos, great idea!  Well all I can say is it was a  good idea at the time, a big swim and I thought I had lost my credit card by the end of it.   I soon realized after emerging from the surf where that Visa card was,  it had managed to swipe itself right between my butt cheeks.  From now on when any retailer asks me to swipe my card, I won’t be able to help but laugh. 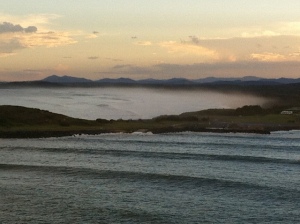 The Swell at Coffs Harbour

Washing Day – Hanging my Speedos out to dry

It rained and rained and rained in Coffs when I was in Sydney.  The rocket was in safe keeping in Ray’s yard at the slipway, but she was out in the rain.  It wasn’t until I was back on the road again, that I realized how water logged the rocket was.  Driving along on my way to Bellingen, just as much water was spraying out of the vents inside the car as the was being pushed off the windscreen with the wipers,  so the statistics looked a bit like this:

Average Speed ……….. 55 kms per hour a slight reduction due to wet conditions

I have a huge following now on my journey, yes a lot of cars are following behind me on the roads and I’m turning more than a few heads even if they are cows.

Lots of Followers and Turning Heads where ever I go

Bellingen is a quaint little town full of friendly people, great cafes – No. 5 and The Purple Carrot a couple of standouts.  Heaps of live music and some great pubs. I stayed at the Federal Hotel.  The “Vibrating Sheets” were playing at the Federal, pumping out every cover imaginable from the 60’s through to the 90’s and as the name suggests my sheets were vibrating to the music too.

Locals at The Federal Hotel Bellingen

There are hundreds of old red telephone boxes in Bellingen, they are on nearly every street corner.  Mick Miller  ……..Clark Kent….Mick Miller, it has a certain ring to it don’t you think?

I got my pink slip and renewed my registration in Bellingen,  contrary to some non believer’s opinions, the rocket is roadworthy for another year.

In Bellingen I met Ross and Chrissy,  they invited me to their property in Dorrigo for lunch, beautiful country just near Bellingen surrounded by an amazing national park, with some great walks and incredible scenery. Ross and Chrissy were great hosts and were a wealth of information about where to head next, being Red Rock.

Red Rock is a little holiday village with a bowling club, about 20 houses, a corner store and a small caravan park North Coast Holiday Parks Red Rock.  There is a headland which separates the Red Rock River from the Ocean and is spiritually significant to the Gumbaynngir people.  I spent a lot of time here swimming and chilling out and have experienced some amazing healing with my shoulder which seems to have freed up after being frozen since leaving hospital. Also before I left Bellingen I visited Simon Green from Quantum Life Bodyworks and had a great session with him.  Simon has been an incredible help with my recovery, his depth of knowledge immense. Thanks Simon for being part of my journey, I’m very grateful.

I set up camp for the first time in Red Rock, I think I’ve got this camping under control….so good! 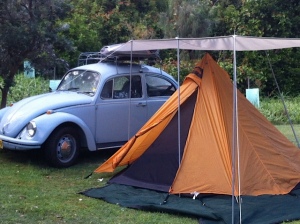 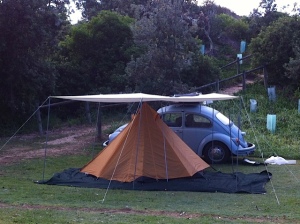 Ideally positioned closest to the beach

Whilst camping I met Tom and Fi Fi, great people who are travelling around Australia with some great tips for an awesome journey.

Until next time……”May a rainbow always touch your shoulder”

3 thoughts on ““Somewhere Over The Rainbow””