Another short drive (I know I have said that a lot, but everything is so close in Tasmania) from Huonville to Port Arthur.  Port Arthur an open air museum in Tassie’s south – about 60 kms out of Hobart,  is a really significant heritage area and is part of the epic story of the settlement of this great country of ours, so of course I wanted to go there and check it out. 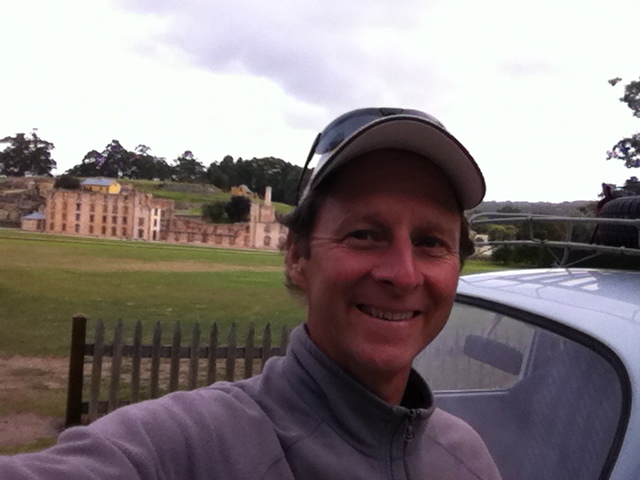 To get to Port Arthur you have to drive over Eaglehawk Neck – a tiny spit of land connecting the Tasman Peninsula to the rest of Tassie.  From about 1832 ferocious dogs and military guards kept a constant watch along the narrow land spit at Eaglehawk Neck. They were on the lookout for escaped convicts from Port Arthur.  Any break of the scrub, movement or slightest noise would set the hounds barking and alert the sentries. Dogs were also placed on stages out in the water to detect absconders attempting a sea crossing. They made an impassable barrier.  There are stories about convicts skinning a kangaroo and wearing the skin, pretending to be a kangaroo to try and get through.

Luckily the rocket and I didn’t have dress up as “Skippy” or  pass any ferocious dogs to make our way to Port Arthur. The scenery was really beautiful, with some big hills for the rocket to negotiate.

It had stopped raining and was still a bit overcast which meant that Port Arthur wasn’t too crowded.

I managed to persuade the lady behind the desk at the entrance to let me drive the Rocket right inside the grounds for some photo opportunities.

Port Arthur was much more than a prison, it was a complete community –  made up of prisoners, military personnel and free settlers. There was a big water front dock with a shipyard building boats, a flour mill, granary, a bakery, church, hospital, boot makers, blacksmiths, they made their own bricks, nails and even plates and grew all of their own food.  The photo below shows what it used to look like. 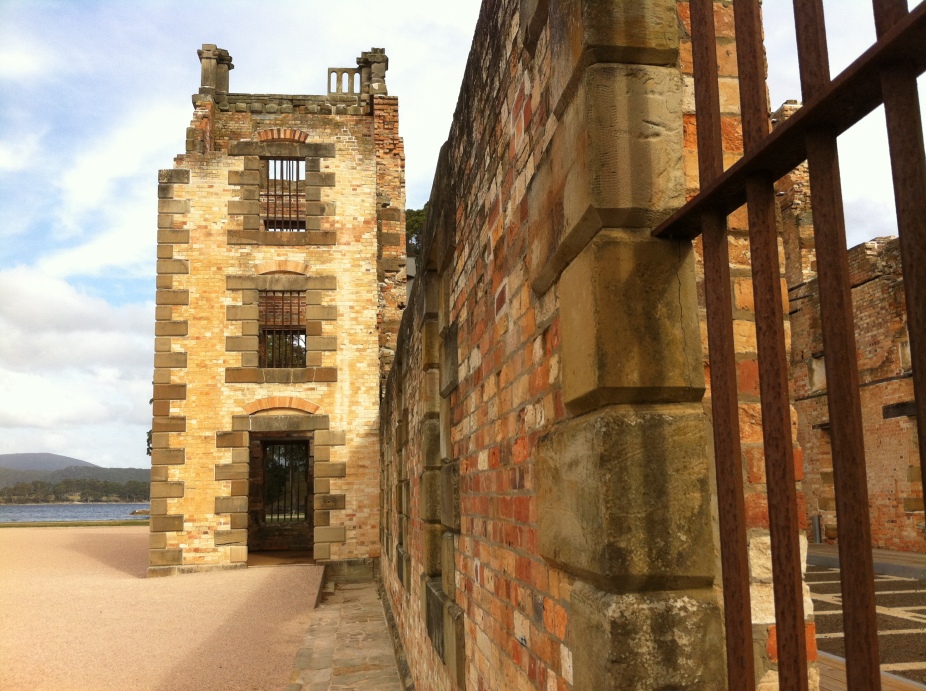 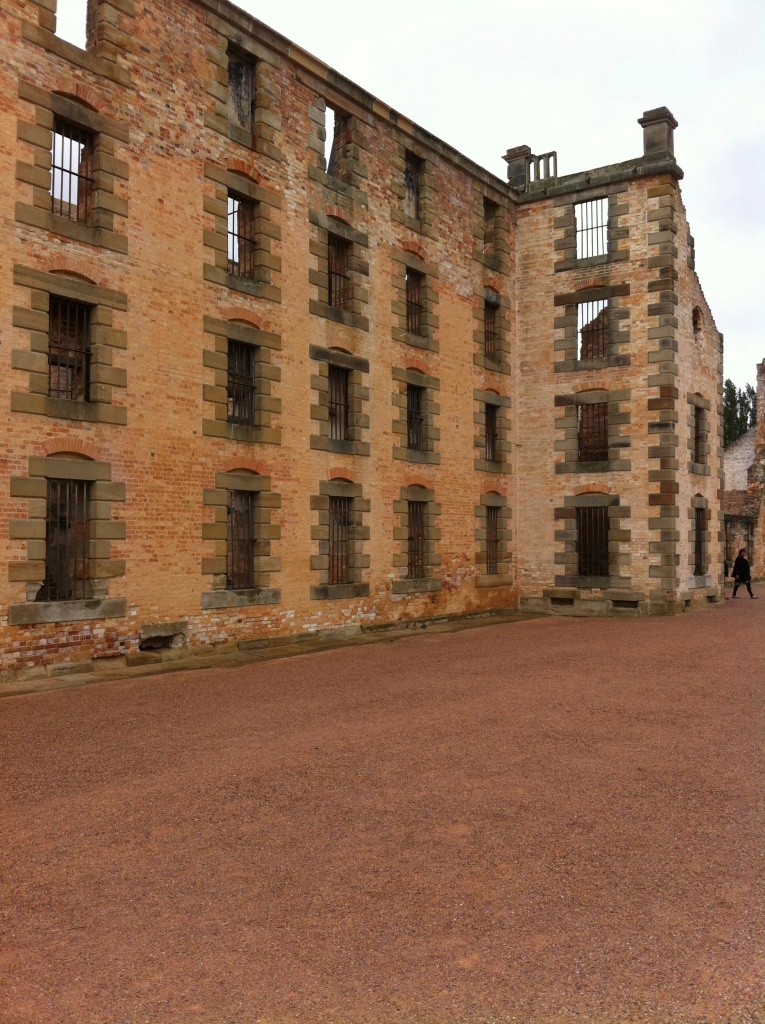 Port Arthur is an extremely pretty place but there is a ghostly eeriness and sombre mood to the place.  Over 1100 prisoners were buried between 1833 and 1877  at the settlement’s cemetery, I went on a little cruise out to the Isle of the Dead where the military and civil officers their wives and children and convicts were buried.  Also to the Point Puer Boys Prison where juveniles mostly aged between 14 and 17 with some as young as 9 years old were housed and educated, separated from the older convicts.  It is hard to imagine!

I stayed the night at the hotel right next to Port Arthur , which gave me a chance to walk through the grounds at night which was really amazing.   It is a huge tourist attraction but I was lucky to dodge the crowds.

The next day I went on a walking tour with some really informative guides, a fascinating historical account of Port Arthur its people and its past.  They told the story of one guy who escaped and made it all the way back to Hobart, after two years on the run he was recaptured.  Because of his intimate knowledge of the area between Port Arthur and Hobart he was used as a guide and surveyor to help map and build the new road  from Port Arthur to Hobart. 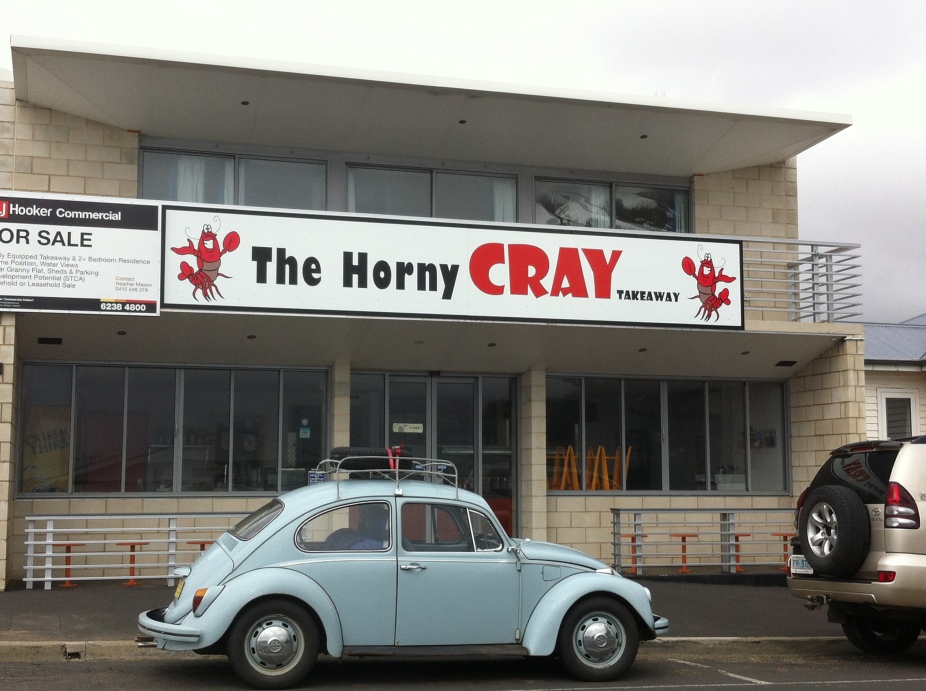 It rained all the way up the East Coast through Swansea, Coles Bay and St Helens.  The coastline on this part of Tasmania is magnificent but I couldn’t see much and didn’t linger as it was pouring with rain, it was the only  rain I had had while in Tassie.

St Helens and its surrounding hamlets – Bay of Fires and Binnalong Bay are places of incredible raw beauty. 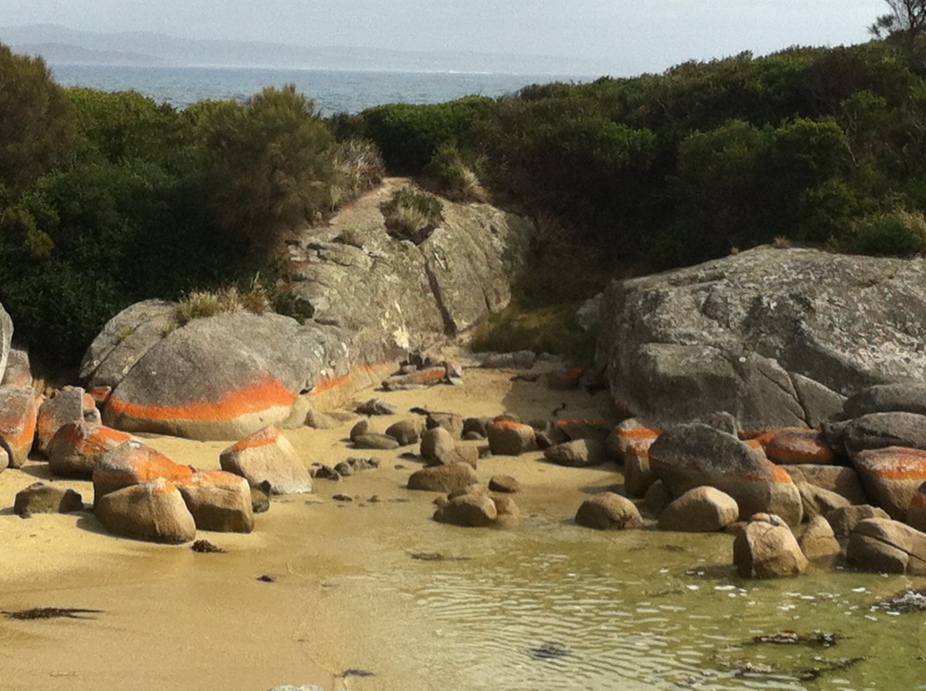 Eventually the sun came out and it even warmed up enough for a quick swim but gosh the water was cold.  Stunning white sandy beaches but I couldn’t believe it  there were huge bluebottles in the water (they must have been wearing thermals). 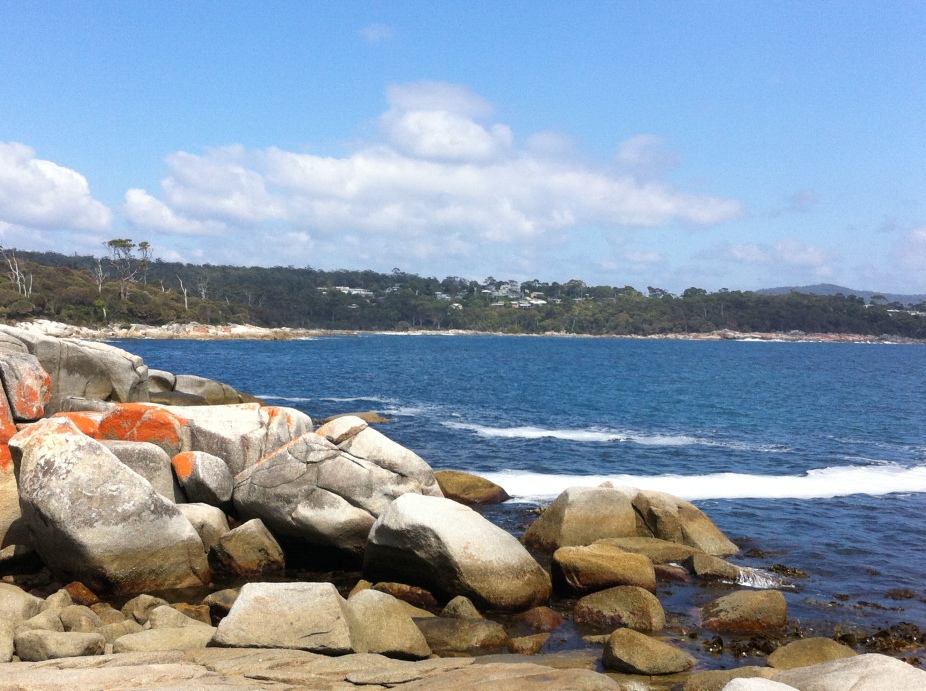 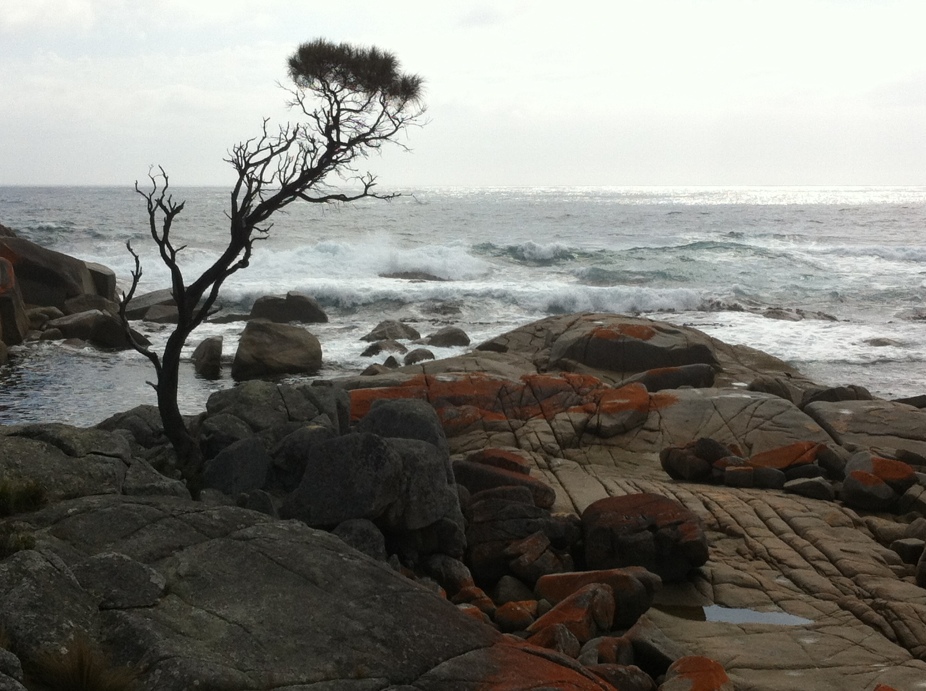 After a little trip through the forested mountain pass to St Marys,  Derby, Pyengana and Scottsdale it was a hop skip and a jump to Launceston.

The rolling hills around Scottsdale.

I visited a wood chopping museum.

Anyone with an axe to grind? Not me!

In Launceston I stayed at the Old Bakery Inn, another great Bed and Breakfast.  I had a lovely walk around town the next morning, dropped into the Design Centre of Tasmania which promotes contemporary craft and design and is home to the Design Tasmania Wood  Collection, well worth a visit.

With a huge crowd behind me,  I  headed to Devonport to catch the ferry for a night crossing to Melbourne. 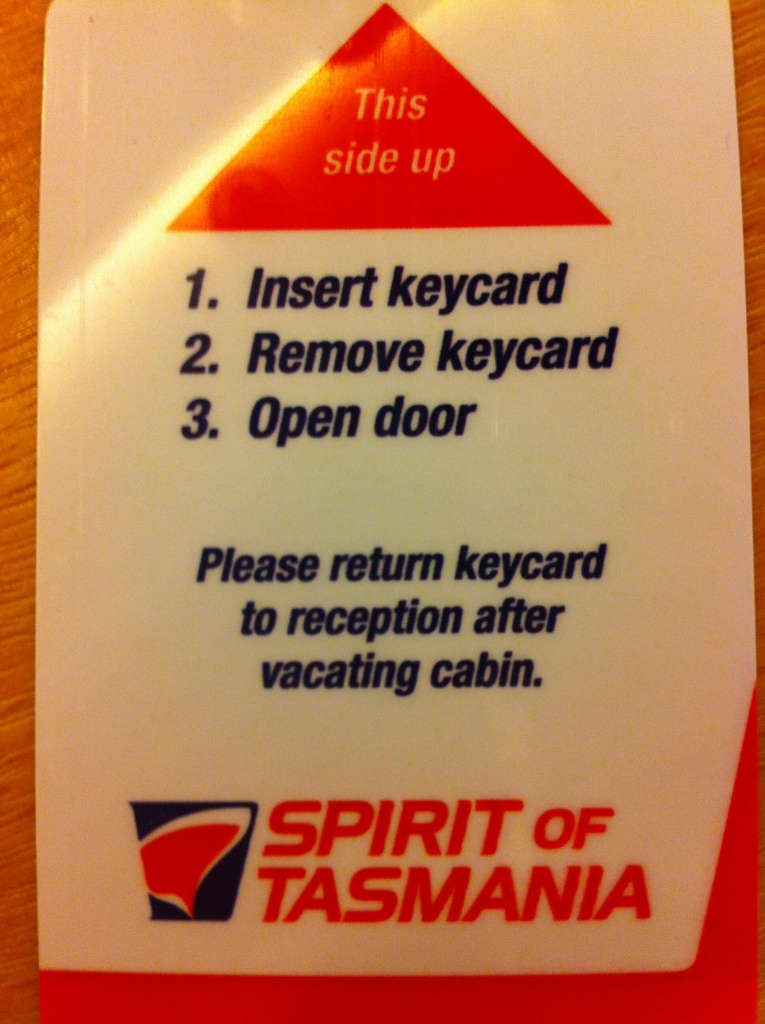 I shared a cabin with a guy who had been travelling around Tasmania on his motorbike.  Why is it the one who snores always goes to sleep first?    I spent the night in the eye of the storm,  the roaring forties were inside our cabin that night rather than out on the seas.

Another incredible crossing of Bass Straight, dead flat and before I knew it I was back in Melbourne.  Just as the Rocket and I were lining up to drive off the Spirit of Tasmania, Robbie Buck from Sydney ABC radio rang for a live on air chat.

You can listen to the interview below.

Give, love and laugh lots.